It's Never Too Late to Learn Chinese!

Almost six decades ago, in the late 1960s and early 1970s, I saw Chinese script for the first time and wondered about what it could mean. I was working at the time as a film editor at the Nederlandse Televisie Stichting (Dutch National Television), pre-editing hours of film footage recorded in China. These sounds and images highlighted my long-standing interest in China which had grown since my youth.

In 1974 I purchased my first textbooks for learning the language: Elementary Chinese, Part 1 and Part 2 (Jīchǔ Hànyǔ, 基础汉语). I was fascinated by all those characters and that there was a meaning and historical background behind each one. However, due to the lack of proper training and guidance, this soon came to a halt. Abandoning teaching myself Chinese did not mean that my interest in the country and its culture had waned. Instead, I filled up my home library steadily with new books about China.

-The author and his books about China © Klaas Geerts

Several years later, while enjoying my retirement for some time already, I found a leaflet in my letterbox from the local Volksuniversiteit – an adult education centre – offering a Chinese language course. “This is your moment to learn Chinese!” said my wife.
“Is it a piece of cake? Not really”, she continued.
“Can one learn to read that language? Of course!” she said.
“Millions of people can, so why can’t you? You have always wanted to know the meaning of Chinese characters and since you have plenty of free time, now would be a good time to take up this course”, my wife explained.
Actually, my wife convincingly said: “You simply must start to learn Chinese”.

My love for the Chinese language and its history took hold, and after completing the first basic course, I continued learning by taking private lessons. My teacher is a native Chinese speaker who is also fluent in the Dutch language, which is an ideal situation! Over the years she not only taught me the basics but also could explain the broader meaning surrounding Chinese characters, embedded in the history and culture of China. The more I learned, the more interested I got in the language and truly enjoyed it. Gradually, I was able to read some of these characters, which had been so undecipherable to me up until then.

The prospect of going to China had never crossed my mind, at first. Learning Chinese was already satisfying to me. But after a while, it did not take much to persuade me into contemplating the idea, and since 2009, I have visited China every year.

During one of my first trips to China I went to a market in a little village in Guizhou and I remember asking: “Wǒ xǐhuān mǎi liǎng gè xiāngjiāo” (我喜欢买两个香蕉), meaning “I like to buy two bananas”. Even though I forgot to use the proper form 'would like' in my sentence, I was surprised and really proud that the lady from the market stall could understand me!

Quite often, people would ask me: “Nǐ shì nǎ guó rén or nǐ cóng nǎlǐ lái?” (你是哪国人 or 你从哪里来?) “What is your nationality or where do you come from?” The Netherlands, or Holland in Chinese is the word ‘Hélán’ (荷兰) but sometimes people heard my answer as ‘Hénán’ (河南), which is a province in Central China. They often replied: “Hénán? You don’t look Chinese.”

But mostly, people would tell me: “Your Chinese is very good.” To this, I usually answered: “Mǎma-hūhu” (马马虎虎). Although there is a nice story behind this expression, it actually means: “My Chinese is just so-so because I still have a lot to learn.”

Even after many years of studying Chinese, the most difficult part for me is understanding the response of people during a conversation. To Western ears, there are so many Chinese words that sound alike, yet hold entirely different meanings. During my travels, I hear myself say this phrase a lot: “Wǒ huì shuō yīdiǎnr Zhōngwén, dànshì wǒ de tīnglì bù hǎo!” (我会说一点儿中文, 但是我的听力不好!) “I can speak a little Chinese, but my listening comprehension is not so good”. “Shénme?” (什么) “What? Listening comprehension?” Some people would start speaking louder, thinking I was perhaps a little deaf. Others took out their mobile phone and wrote what they were saying on the phone screen in response to my ‘tīnglì’ (听力). The word indeed carries two very distinct meanings: ‘being hard of hearing’ or ‘language listening ability’. Chinese friends told me that it was preferable to say: “Wǒ tīng bù dǒng” (我听不懂) “I don’t understand”. Literally it translates into ‘I listen but do not understand’.

-The author and his friend in Dong Village, Guizhou Province, China © Wu Zeng-ou

The modern English alphabet is a Latin alphabet consisting of 26 letters, with a sound connected to the pronunciation of each letter. It is easy to remember the sound of these 26 letters. A single letter has no meaning by itself. Chinese, however, is logographic and has thousands of logograms, which are written characters representing a word or phrase. To learn this has really been a challenge for me. Over the years I have come to recognize many single characters, building up to more complex characters. Being a visually-oriented type of learner is certainly an advantage for me in recognising and remembering the many logograms in the vast “sea” of Chinese characters.

In the Chinese language, almost each character represents a word. However, combining different Chinese characters can result in a totally different meaning and thus interpretation, in contrast with the meaning derived from a single character. Sometimes this can lead to wrong interpretations. Several years ago, having just started to learn Chinese, I saw a sign with “Xiǎoxīn dì huá”(小心地滑). At that time I only knew the literal meaning of the first two characters. ‘little heart’. Huh? Why little heart? I thought. Actually,“Xiǎoxīn” (小心), the first part means ‘caution!’ The second part ‘dì huá’(地滑) means ‘wet floor’. Now I know that the combination of characters on the sign meant ‘caution, wet floor!’, which had nothing to do with a little heart.

That was not the only time I had made a wrong ‘translation’. Being fond of pastries, I quickly learned the word for cake in Chinese ‘dàngāo’ (蛋糕). ‘Dàn’ means ‘egg” and ‘gāo’ means cake. I could easily remember the word because I love cake. I also came to learn the word ‘zāogāo’ (糟糕). Great, I thought, another kind of cake? Far from it, this character combination 糕 translates into ‘too bad’ or ‘how terrible’. Because of this I now more or less compare Chinese characters to syllable language building blocks. It might not always be accurate but it helps me with the learning process.

The sound advice from my wife to learn Chinese has opened a much greater horizon, far beyond the language in itself. For several years I have volunteered as a cameraman/ editor for the Chinese Education Foundation in the Netherlands (荷兰中文教育协会), compiling a video report of their national biennial language and cultural competitions. This involvement snowballed into a wider circle of friends throughout the Netherlands as well as in the Chinese community at large. Countless surprising, amusing, interesting and often touching experiences have enriched my life as a result of this involvement. Hopefully there is more to come!

For me, learning the Chinese language has proven to be a lot more than striving to master a language. It gave me the opportunity to look behind China’s ‘front door’ and embrace the challenge of crossing borders into understanding another culture and discovering a path to new friendships. 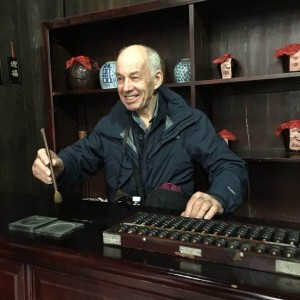 Klaas Geerts is a retired film editor and gardendesigner. His lifelong passion for the visual arts, particularly within eastern cultures, sparked his interest in China's language and its people from…