In recent years, Xiamen has gained in popularity as a travel destination among both Chinese families and foreign tourists. With its clean air, blue skies and turquoise sea together with hospitable people, this upward trend makes perfect sense. Back in 2019, I had the opportunity to study Chinese language at Xiamen University and the city definitely stole my heart, so much so that I have put pen to paper to share some reflections on this coastal city in south-eastern China.

History and economy
Xiamen, home to 4.1 million people (世界人口网, 2019), is located in Fujian province. In 1980, it was designated as one of the four initial Special Economic Zones (SEZs) by then Chinese President Deng Xiaoping, ushering in an opening-up period that attracted foreign investment and trade. Since then, the city has undergone dramatic transformations, something that you feel, even on a short-term stay, with its building and construction projects.

Xiamen is usually regarded as an island comprising two city districts. However, the city is also made up of four districts on the mainland which actually have a much larger surface area than the island itself. The fact that Xiamen is located both on an island (岛内 for local people) and on the mainland (岛外) has made the city an ideal location for attracting infrastructure investment to interconnect the mainland with the island. The four main bridges and one tunnel (四桥一隧), for instance, have become essential artery routes for locals on either side.

One of those bridges, Xiamen Bridge, was opened for vehicles in 1991. With a span of more than two kilometres, it was China’s first cross-sea highway bridge (China Daily, 2015). In 2009, after four years of construction, the Xiang’an Tunnel was opened to traffic. This tunnel, more than eight kilometres long, was the first sub-sea tunnel connecting an island with mainland China. Before the tunnel was built, travelling from the island to Xiang’an district took at least one hour. Construction of Xiang’an Tunnel has reduced journey times to just eight minutes (China Daily, 2009).

Upgrading infrastructure combined with policies to stimulate investment and tourism have contributed to the economic development of Xiamen. The city has experienced breath-taking GDP growth: from 50 billion yuan in 2000 to 600 billion yuan in 2019 (聚汇数据, 2020). The downside of Xiamen’s economic growth is that housing prices have also risen exponentially. The average price for buying an apartment in the city centre is 65,000 yuan per square meter (Numbeo, 2021), or more than 8,000 euros. This is even more expensive than Amsterdam!

Green city
From increased recycling initiatives to household waste separation (CGTN, 2019), sustainable development is big in China. It was made a national priority by the Chinese government in 2012, and President Xi Jinping recently announced that China aims to be carbon neutral by 2060 (BBC News, 2020). At the end of 2018, there were 425,000 electric buses in service worldwide and 421,000 were driving on Chinese roads (Bloomberg, 2019).

Xiamen does not just comply with this national policy with households separating their waste and electric buses shuttling people around. It goes a step further, showcasing itself as the ‘Garden of the Sea’ (海上花园, 诗意厦门). I still remember vividly my feeling of amazement when taking the bus from Xiamen Airport to the city centre and seeing all the palm trees. With a forest coverage of over 40% (China Daily, 2015), Xiamen can rightfully be called a green city. This is not just a coincidence, but a logical consequence of a greenifying policy which was started as early as 1994.

In line with its strategy to promote green transport, Xiamen opened the world’s longest elevated bicycle path in 2017 (ArchDaily, 2017). Being a Dutchman and keen cyclist myself, I could not resist hiring a bike and riding these cycle lanes on one of the first days after my arrival in Xiamen. ‘Cycling high’ is how I would describe riding the 7.6-kilometer path which soared five meters above the ground at times. Night-time riders need not fear either: 30,000 lights light up the cycle path in the hours of darkness, guiding them safely across this amazing path.

Xiamen also uses an advanced technological system, designed by Xiamen University, to reduce waste in rivers, seas and oceans (Chun, 2020). The system processes camera images from water of the Jiulong River. It then calculates the most suitable points for collecting the waste the next day, based on the flow of the river. Discarded fishing nets and other fishing equipment made up a portion of the waste collected. Known as “ghost gear”, this problem does not just affect waters around Xiamen but right around the world (Hooper, 2019). Looking to break new ground in the elimination of plastics from the ocean, Xiamen has implemented a program to reduce this type of waste in two novel ways: by making fishing tackle biodegradable and also by recycling it.

Gulangyu
For most visitors to Xiamen, a trip to Gulangyu is on top of their wish list. Gulangyu is a small outlying island, whose surface is less than two square kilometres. The island (屿 yǔ) is named after the waves (浪 làng) crashing into the rocks. This sound is said to be similar to that of a drum (鼓 gǔ).

Frequent travel was very much a feature of my semester-long stay in Xiamen. One memorable trip is the five-minute ferry ride from Xiamen Island to Gulangyu. Although it was just a short journey, it felt as if I had travelled from China back to Europe in five short minutes. The island is full of charming European-style villas, schools and churches. After the first Opium War (1839-1842), Great Britain took control of Xiamen (by then called Amoy) and several other Chinese ports. Merchants, missionaries and diplomats settled on the island of Gulangyu. They were attracted by its natural beauty and strategic location, and brought Western architecture to the island. More Westerners followed so that consulates from thirteen different countries were established (You, 2017). Nowadays, many of them function as museums and art galleries.

With its unique architecture, fresh seafood, picturesque palm trees, nice beaches and viewpoints to enjoy the skyline of Xiamen, it is no wonder that the island is a popular tourist destination. From my own experience, I can highly recommend watching the sunset at Gulangyu!

Xiamen University
Just as with Harvard and Yale in America or Oxford and Cambridge in England, rivalry exists within China over its prettiest university campuses. Once in Wuhan, locals there proclaimed that the campus of Wuhan University with its cherry blossom is the prettiest in the country. Vying for the unofficial title of most beautiful campus in China, Siming district campus of Xiamen University is definitely in the running, and is well worth a visit. The blend of Chinese architecture and some prominent Neoclassicist features together with the peaceful lake make it a very charming campus. Surrounded by hills and the ocean as well as a beach just a few minutes’ walk away, the campus has a beautiful scenic backdrop, making it unique in China.

The university was founded in 1921 by Tan Kah Kee (陈嘉庚). Tan was born in Xiamen but moved to Singapore at a young age, where he became a successful business man and political activist. According to his vision, everybody is responsible for the rise and fall of the nation (天下兴亡，匹夫有责). Moreover, he believed that education is a key factor for social growth. Since Tan lived overseas in Singapore, Xiamen University became the first university founded by an overseas Chinese. As I discovered when travelling: ‘XiaDa’, the university’s commonly used acronym, is famous across China and has the reputation of being one of the top academic institutions in the southern part of the country. It has more than 40,000 enrolled full-time students and also boasts a campus in Malaysia.

Local cuisine
Any article addressing Chinese urban spaces cannot overlook local food. Due to its geographical proximity to the sea, it is no surprise to learn that seafood forms a key part of the Xiamen cuisine. A very typical dish of the province of Fujian is called ‘Buddha Jumps Over the Wall’ (佛跳墙). According to legend, a scholar was preparing the dish near a Buddhist monastery. The pleasant aromas of the meat-based dish attracted vegetarian Buddhist monks, who jumped over the temple walls. A poet wrote down this story and claimed that even Buddha would jump over the wall to taste it. The soup sometimes consists of up to 30 ingredients, including shark fin, quail egg, scallops and abalone. It is an expensive delicacy and the preparation can take many days. A more common dish in Xiamen is shachamian (沙茶面) or satay noodles, which can be found at almost every street corner. The dish consists of a little spicy soup filled with noodles, usually together with squid rings, shrimps, pork belly, bean sprouts and mushrooms. My personal Xiamen favourite is hailijian (海蛎煎) or oyster omelette. Usually, the omelette is made of fresh oysters, egg, spring onions and cabbage and served with some sweet chili sauce. For me and my fellow students, this was the perfect late-night snack after a day of studying! A final typical Xiamen dish that should be mentioned is tusundong (土笋冻). Picky eaters may skip this one, not least because it consists of gelatine extracted from boiled sea worms topped with spices and herbs.

Recalling the wise words of Confucius: “Having friends coming from afar, isn’t it a pleasure?”, and this is certainly how I felt during my stay in Xiamen. The pace of life is significantly slower here than in China’s major cities and the hospitality of the local people is heartwarming. They often offered me to sit down and have an oolong tea with them: the perfect way to get to know the local culture!

The combination of the incredible speed of economic growth and the simultaneous focus on greenifying the city – this is what fascinates me about Xiamen. Sustainable development is high on the agenda in China and I believe Xiamen is a forerunner in this field. The pleasant climate—allowing me to celebrate my birthday in November in t-shirt and shorts—also contributes to its reputation of one of China’s most liveable cities. And last but not least: for me, the people who make up the city are the most important. I can only wish that while the city continues to grow, its warm and welcoming attitude will continue to exist. 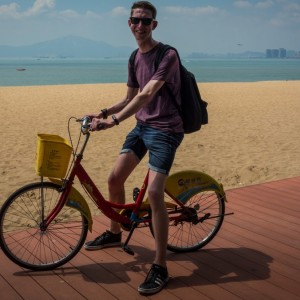 Sjoerd van Haaren is an MSc Finance graduate with a profound interest in Chinese language and culture. In the past, he followed several courses at the Groningen Confucius Institute and he studied…